Yesterday a hummingbird flew into the house my husband and I are building in Whitefish, MT and couldn’t find his way to the patio doors it came through in the first place. Instead, he went to a fixed window high above, catapulting himself into the glass toward sunlight and green trees. My husband and I decided to leave all the doors open (the windows, still without their handles installed could not be opened). We hoped he would eventually fly down and find the gaping doors. After an hour though, he still hadn’t left the high window and was getting exhausted trying to go through the glass. The poor little thing would flutter his wings at high speed, buzz and bang into the glass, then fall to the sill in utter exhaustion, rest a bit, then hopelessly begin against the window again. 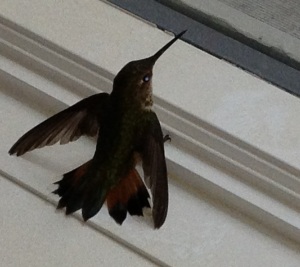 “We have to help him,” I said to my husband, Jamie. “We need to get a net.” I figured we could use the tall work ladder in the house to climb up and catch him. He agreed and we drove home and found a trout-fishing net, taped it to a long pole from a garage broom and went back to the construction site. I was determined to get this humming bird out because it pained me to think the little creature might die in our soon-to-be new home. I’m a bleeding heart for most animals anyway and talk about bad omens to have a beautiful creature die in the house you’ve just spend eight months working on.

But, when we arrived back at the building site, the hummingbird was no longer at the window. “He must have made it out,” Jamie said. We checked the kitchen, the bedrooms, the laundry room, and the bathrooms and saw no hummingbird.

I agreed, but was skeptical because he had such a one-track mind trying to get through the glass and looked so exhausted. We shrugged and locked up the back patio doors. “That’s really great,” I smiled, but still felt uneasy because it seemed too simple. And sure enough, as we went to leave through the front door and lock that as well, we heard the buzz of his flapping wings again. I looked at Jamie, “he’s not gone.” Then from the loft area above, he flew out. He zigzagged slowly as if drunk, weaving up and down in a wave. He tried to go toward the same window he’d originally gone, but in his fatigue, he couldn’t make it. He hit the wall and fell toward the floor. But just before he hit the ground, he managed to veer up and make it over to a lower window beside the patio doors. “Give me the net,” I said grabbing for it. I rushed over and gently placed the soft weave over him. “How do I scoop him without hurting him?”

“Just push the thread on top of him and scoop him out.”

With words I know I’d be reminded of later, I said, “You do it.” I didn’t want to hurt the little guy. Jamie came and grabbed the net and just as he did the hummingbird gathered enough strength to grab onto the weave with just one talon.  Jamie lifted the net with him attached by one very tiny spur. I rushed and re-opened the patio doors while Jamie hurried out and gave the net a gentle shake. In a mere instant, the hummingbird – renewed by the fresh air and the sunlight – flew straight as an arrow to a high branch on a Lodge Pole Pine to his freedom.  Jamie and I smiled at each other with real relief this time.

Setting a manuscript free. Why my book is like that hummingbird.

Later, I couldn’t get the little bird out of my head. That night, I couldn’t sleep. I tossed and turned thinking of him, his red and velvety green tail, his long, pointed beak, his small, powerful wings propelling him toward sunlight. Then I thought about my latest manuscript, a mystery set in Glacier National Park that is currently with an agent in New York, hopefully on the brink of finding an editor. For six months, I have gone around and around in my head about whether to go eBooks on my own or go the traditional publishing route because I have to admit, I’m still one of those writers who wants to see my book edited and printed the traditional way. But I know that industry is getting increasingly more difficult to publish in.

The comparison between my book and that trapped hummingbird occurred to me. There are times I feel like I am unsuccessfully trying to get my manuscript to the light of day – to the hands of readers – only to bash up against glass as I wait on the NY world of publishing. My manuscript has been revised and revised and endlessly doted upon. I feel so close to getting it to the hands of readers, yet so far. I’ve been patient, but I am ready to find the sweet and sometimes not-so-sweet nectar of readers for it one way or another.

Just like the hummingbird, whether my manuscript’s saving net is an agent, an editor in a publishing house or KDP (Kindle Direct Publishing), I am more determined than ever to have it fly to the highest branch it can find. I will keep you posted when it does!