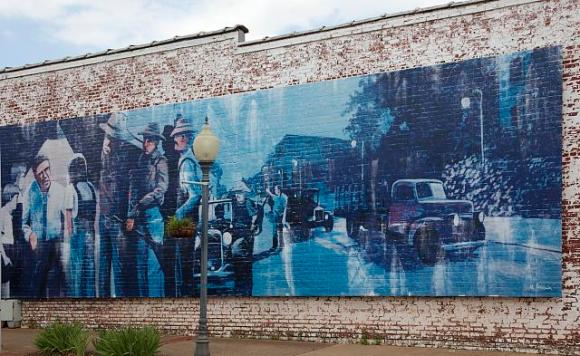 Historic mural depicting the Harper Lee novel, “To Kill a Mockingbird” located in Monroeville, Alabama.  Courtesy of the Library of Congress

Southern women writers have been the greatest influences on my writing. I share their passion for the Deep South and its diversity of people and cultures. Their natural writing style lends itself to the rhythm of storytelling. I admire their ability to use their writings to make us laugh, cry, and empathize with others, as well as their fearlessness to turn a light on the dark underbelly of our sweet-tea society.

I think the first inkling that not all southern little girls grew up in a safe, loving environment like mine came when I read South Carolina native, Dorothy Allison’s novel, Bastard Out of Carolina, which will break your heart. It educated me to the fact that bad things really do happen to good people, to children, and the secrets families hold can rip them apart as well as protect them. I returned to these themes when I wrote Breaking TWIG.

Alabama’s Fannie Flagg is a woman of many talents. Best known for Fried Green Tomatoes at the Whistle Stop Cafe, which became the film Fried Green Tomatoes, her writing is funny and candid, without being cruel. Her characterizations of Southerners might seem somewhat stereotypical to anyone not from the South, but as someone who grew up in the Deep South, I find them spot-on.

My favorite southern woman writer, the one who influenced my writing the most, is Harper Lee, who wrote the1961 Pulitzer-Prize-winning novel To Kill a Mockingbird. She published only one novel in her lifetime, but a half-century later, To Kill a Mockingbird stands as one of the best-loved works in all of American literature.

I first read her book when I was in junior high. At the time, my own Texas community was struggling to come to grips with the Civil Rights Act and integration. The story, which originally touched sensitive chords in America’s unfolding Civil Rights drama, still reverberates today in the national consciousness. It’s a book about courage, and I think it took courage on the author’s part in 1960 to write with integrity and honesty about the issues of racism and injustices in her own community. Harper Lee stayed true to her story and to her characters, and I regard that as the ultimate responsibility of any author.

6 thoughts on “Women Writers of the South”