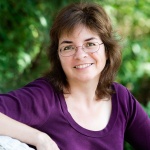 Join Leslie on Facebook for a chance to win a gift box of jam from Eva Gates Homemade Preserves. As Erin Murphy, the protagonist of Death al Dente, nominated for an Agatha Award for Best First Novel says, “If it’s made in Montana, it must be good!”

And of course, so does love. Whether it’s romantic love, filial love, or that deep and mysterious form of friendship the Greeks call agape, the longing for love and all the related struggles tug at readers of nearly every kind of fiction.

But when my first mystery, Death al Dente, was published last year, I was surprised to discover that mystery readers have distinct opinions about how much romance is too much. Cross over the line, and your books will be categorized not as mystery but as romantic suspense. That’s not bad—but it does put you in another section of the bookstore, and give you a different set of readers. The audiences overlap, but some readers will never cross that line.

Other readers love a good romantic tug-of-war. The love triangle. Will Heroine choose Guy A—or Guy B? Will the man we suspected of murder in the first installment instead turn out to be Mr. Right? Will the man we were rooting for turn out to carry a torch for the long-lost love, returned from the dead in book five?

Lo these many years, I found myself interested in two men at the same time. “You’re old enough,” I told myself. “You can date them both.” And so I did, for about a week, when the second man banished all thoughts of the first. (Except for that oh-so-uncomfortable conversation with the first man. He lived.) ANYway, I’m not the only woman to have such an experience, so when my girl Erin found herself interested in both Rick Bergstrom, aka “farm boy,” and Adam Zimmerman, the nerd-turned-hunky wilderness camp director who carried a torch for her in college, though she barely noticed him—well, it seemed true-to-life.  I was not prepared for the readers who said “oh, not a love triangle.” Others said “don’t let it go on too long.” I suspect that despite its realism, it’s been over-used—one series in particular comes to mind, the one with the NJ lingerie buyer who—well, never mind.

But don’t worry. Erin’s a woman who prides herself on both her decision-making and her intuition. She’ll know her  heart soon. I hope you’ll come along for the ride.

How much romance is enough in your mystery? And how much mystery do you like in your romance?

One thought on “Is it a Mystery—or a Romance?”