LUNAR LUNACY
March 16th is the next full moon. What are your nocturnal plans for that eve? Have you wondered if there is any truth to unusual occurrences being more common under the full moon? Have you ever seen a werewolf? 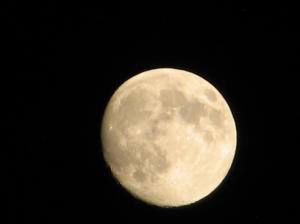 Dating back to the Roman times, stars and planets were thought to influence health and behavior. Electromagnetic effects and a bright full moon, produce high tides and can cause sleeplessness. A full moon has also purportedly correlated with a rise in violent crime, increased births, psychotic behavior and even increased blood loss during surgery.

Working nights in emergency rooms for many years with other strange nocturnal staff members, I considered full moon night shifts a fun time to watch for unusual occurrences.

We all bought matching scrub shirts in a bright green alien print design that we would wear on full-moon-shifts. During an eclipse-of-the-moon-shift, we wore them, too, but in addition, I provided alien sunglasses for everyone to wear. We didn’t wear the glasses into patient rooms or they would have believed we were all experiencing lunacy — and maybe we were. Lunacy is intermittent insanity related to phases of the moon.

Numerous studies over years, researching whether there is any correlation between full moon nights and weirdness, have been negative — no correlation. So if you do or see something strange under a full moon, it’s not the moon. It may be your perception.

Humans and animals have circadian rhythms that could be disturbed by less sleep due to bright moon beams. In one small study on a few psychiatric patients researchers reported a small increase of abnormal behavior in schizophrenics on full moon nights, possibly due to reduced sleep…this needs more research to consider it valid.

We all know werewolves appear at night. Those were wonderful stories of people experiencing unusual attacks by supernatural mythological demons that looked part man and wolf. There is a possible medical explanation for some reports. Two disorders known today can alter appearances and behavior by making the affected individual grow excessive body hair and only go out at night. So, if you want to write about real werewolves, read about porphyria and hypertrichosis.

The day after the full moon is St. Patrick’s Day. Some say beer will turn green on that day. Stranger things have happened.

May you have a memorable March full moon experience.

One thought on “March Madness Under a Full Moon”