We who live near the Rocky Mountain Front are familiar with that sudden, temperature- raising blast that melts winter out of our front yards within an hour. It can be crazy making. Actually, winds that bring madness are known by different names: in Montana, Chinooks, in France, mistrals, in California, Santa Annas. All are phenomena known in Europe as Fohn winds, dry, warm, downslope winds that occur in the lee side of a mountain range. (Santa Annas actually come in off the desert, but certainly affect moods.) An arching cloud cover can signal Chinook weather.

I’ve heard that places in Europe ban people from marrying and judges from imposing sentences during Fohn winds because humans can’t be trusted to make good decisions during such times. Joan Didion, in her essay on the Santa Annas, quotes writer Raymond Chandler, “On nights like that, every booze party ends in a fight. Meek little wives feel the edge of the carving knife and study their husbands’ necks. Anything can happen.” The list of music albums and books that refer to Fohn winds is long and growing. Such winds frighten, depress, and generally torment novel, as well as nonfiction, subjects.

I have to say, though, that I’m usually grateful for that sudden snow-eating rush of air, and accept our Montana Chinooks as benevolent presences. Still, wind easily changes our moods up or down. As with any force of nature, we ought to respect it. The poet Christina Rossetti gives a hint of caution here courtesy of trees:

Who has seen the wind?
Neither you nor I,
But when the trees bow down their heads,
The wind is passing by.

I have found yoga, friends. And rather than beat myself up for not beginning my practice decades ago, I am so grateful to have found it all.

I completed a questionnaire at my first session. It asked me for basic information about myself, injuries that might affect my practice, and the ubiquitous Where did you hear about us? I answered Word of mouth, but the truth was this: I had seen two of their instructors on the main street of our little town and thought, I want what those gorgeous, unfussy, healthy women have. Every woman I know who practices yoga walks with a grace and purpose.

As with any new endeavor, there was much more to be gained than firmed batwings and good posture. I’ve learned the value of meditation. What used to be a waste of time (Let’s get on with the task at hand!), has become my favorite time of day. After practice, meditation is the tingly relief of a quiet body. At home it has become a time of being, listening, and sometimes prayer.

My 21 mile drive into town is a frequent blog topic—a long drive but a shorter distance than my old commute through a large congested city. The lovely drive changes every day as 2014’s Mad March melts our heavy accumulation of snow, ices over, and then snows again.

On my way into yoga this morning, fog hung over the small valley at the base of our long hill, and I was reminded that my drive, this miraculous place that offers yoga to breathtaking scenery, is my source of meditations and peace and well-being.

Burden of Breath will be available for free download March 20-21.

LUNAR LUNACY
March 16th is the next full moon. What are your nocturnal plans for that eve? Have you wondered if there is any truth to unusual occurrences being more common under the full moon? Have you ever seen a werewolf?

Dating back to the Roman times, stars and planets were thought to influence health and behavior. Electromagnetic effects and a bright full moon, produce high tides and can cause sleeplessness. A full moon has also purportedly correlated with a rise in violent crime, increased births, psychotic behavior and even increased blood loss during surgery.

Working nights in emergency rooms for many years with other strange nocturnal staff members, I considered full moon night shifts a fun time to watch for unusual occurrences.

We all bought matching scrub shirts in a bright green alien print design that we would wear on full-moon-shifts. During an eclipse-of-the-moon-shift, we wore them, too, but in addition, I provided alien sunglasses for everyone to wear. We didn’t wear the glasses into patient rooms or they would have believed we were all experiencing lunacy — and maybe we were. Lunacy is intermittent insanity related to phases of the moon.

Numerous studies over years, researching whether there is any correlation between full moon nights and weirdness, have been negative — no correlation. So if you do or see something strange under a full moon, it’s not the moon. It may be your perception.

Humans and animals have circadian rhythms that could be disturbed by less sleep due to bright moon beams. In one small study on a few psychiatric patients researchers reported a small increase of abnormal behavior in schizophrenics on full moon nights, possibly due to reduced sleep…this needs more research to consider it valid.

We all know werewolves appear at night. Those were wonderful stories of people experiencing unusual attacks by supernatural mythological demons that looked part man and wolf. There is a possible medical explanation for some reports. Two disorders known today can alter appearances and behavior by making the affected individual grow excessive body hair and only go out at night. So, if you want to write about real werewolves, read about porphyria and hypertrichosis.

The day after the full moon is St. Patrick’s Day. Some say beer will turn green on that day. Stranger things have happened.

May you have a memorable March full moon experience.

I have to say the idea of getting mad appeals to me, but I’m not particularly good at it. No one’s ever accused me of being a “hot head” with a “short fuse,” for example.

My specialty in the mad spectrum, if I even have one, is irritation.

The expression I like to use, from the fairly funny animated film Open Season, is that something really “chaps my khakis.”

I’m not entirely sure what that literally means, but I sure know what sets it off…

1. Running behind and discovering the gas tank is empty. How long has the light been on? That’s the $55 dollar question, since that’s how much it takes to fill my van.

3. Putting a fitted sheet on the bed. Why do they never fit after you wash them once?

4. My vegetable crisper drawer which is so low and so deep, it’s where vegetables go to die.

5. My daughters not picking up their stuff in the middle of the living room.

6. Tripping over the stuff my daughters left in the middle of the living room.

7. Being robbed of a morning’s writing by the phone ringing, someone at the door, or worst of all…  my own procrastination.

8. Making a banking err that never errs on the side of more money in my account.

10. Having my husband nicely suggest that I seem irritated.

What chaps your khakis?

Hollywood Beginnings is now available as an audiobook! (Click on the cover to listen to a sample on Amazon & Audible) 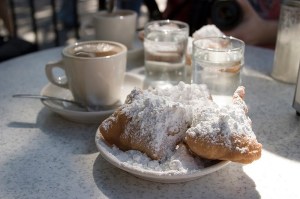 I’d wager there is plenty of March Madness going on today in New Orleans because it is Fat Tuesday.  Mardi Gras is French for “Fat Tuesday”—the final feasting before the fasting of Lent, which begins tomorrow, Ash Wednesday. Fat Tuesday is also called Shrove Tuesday, a name that comes from the practice of shriving—purifying oneself through confession—prior to Lent. In many countries, Mardi Gras is the culmination of the carnival season of revelry and feasting.

I have visited the beautiful city of New Orleans on numerous occasions, but have stayed clear during Mardi Gras. I prefer to go in April or in October, when the temperature is nicer, the crowds have thinned, and hotel rooms in the French Quarter are more plentiful and reasonably priced.

New Orleans is an epicurean delight from the famous muffaletta sandwiches, to a bowl of red beans and rice, to shrimp Creole and jambalaya. Or treat your taste buds to a steaming bowl of gumbo.

No trip to New Orleans is complete without visiting my favorite place in the French Market and that is the Café du Monde. Grab a table on the patio, savor a cup of chicory coffee and indulge in warm beignets sprinkled with powdered sugar, while listening to the joyous sounds of a sidewalk jazz band.

Delicious food, laid-back atmosphere, and music that stirs the soul. Little wonder that New Orleans is called The Big Easy.