Karen Wills
My last three pets chose me. The first two were dogs, but the third is too elegant to be anything but a cat. Each was a stray, common up here in the Canyon which some see as a pet dumping ground instead of the Gateway to Glacier.
Buddy, a Blue Heeler and the smartest, most intuitive dog I ever knew, appeared first. His only flaw, certainly a minor one, was a compulsion to herd every living thing including houseguests. Buddy had been treated badly by someone. At first, he hovered in the trees near our property. Then the neighbor across the road started feeding him. Eventually, Doc asked if Mom and I would take over as he’d seen Buddy stick with me every time I went for a walk. In short order, Mom and Buddy bonded to the degree that he would have died protecting her. They loved and understood each other, finally even suffered Alzheimer’s together. In the end, Buddy could only appropriately be laid to rest near our house where he’d shared so much love.
Maya and Buddy overlapped. One day, a Samoyed-husky cross, the cutest puppy I’d ever seen, ran up to make friends. This happened daily. Then her owner left her at the pound. When I heard, I called and obtained a stay of execution by four hours. Then she was ours, the most social, self confident, and dazzling of creatures. A neighbor and I once discussed all the dogs we knew and where they would be in the categories of a high school class. Maya was the uncontested choice for homecoming queen. She was so gorgeous people used to stop their cars to ask me about her.
We had Maya cremated after she succumbed to Cushing’s disease. One day afterwards, I took a walk to our usual haunts, including an overlook above the Flathead River, and scattered her ashes in all our favorite places. In my best imaginings, she still joyfully chases but never catches gophers in a field of multicolored wildflowers.
Strays are a gift from the universe. 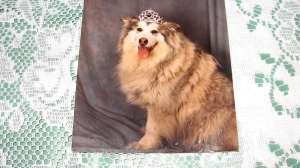