Imagine six people and a barking dog in a cabin. Two people threaten the bad guy to tell his secrets, but three others fight to prevent the secrets from coming out. The characters struggle—verbally and physically. A gun goes off, and chaos ensues.

My critique partners recently reviewed this climactic scene of my third novel. Yes, it’s emotionally charged, and the dialogue works well, but they had trouble knowing where each person stood, fell, or lunged at any given point. I envisioned the scene clearly, but it confused my readers. The group suggested I choreograph the scene, that is, draw a floor plan of the cabin with furniture, props and people moving around. Each blue dot represents a character below. 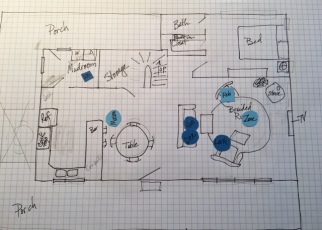 I learned a lot from constructing this floor plan and moving my characters with the action.

I’ll incorporate floor plans of important locations in my research from now on.