These Spring days the big question heard everywhere you go is, “Should I remove the studded snow tires or will I need them again before summer?”

LESLIE BUDEWITZ: Good question — I had to leave mine on, the summer tires stacked in back, while my car sits at the airport! Why? Because I’m in LA this weekend, attending Sisters in Crime’s “Adapting to Hollywood” Conference, on pitching, screenwriting, adaptations, and more! Then home, to change out those tires!

Later in April, I’ll be going to New York for Edgars Week — as president of Sisters in Crime, I’m accepting the Raven Award given to SinC by the Mystery Writers of America for contributions to the mystery field other than creative writing. On Tuesday, April 26, 2016, I’ll be joining other visiting members of MWA for a meet and greet at the Mysterious Bookshop!

Then it’s on to Bethesda, MD for Malice Domestic, the fan convention celebrating the traditional mystery. I’ll be on a panel discussing food in fiction — one of my favorite subjects!

Marie F Martin reports she is closing in on the rewrite of her next novel. With the help of her two critique groups, it is growing and changing into a readable story. The editors in both groups are sharp and push her to write her ideas clearer and more precise.  The working title has been 101 Harbor Hill, but after all the good help she has received, she is now calling it, Don’t Mess With Roberta. Of course, this is still a work in progress so the title will change again and again.  You can find her books on her Amazon page. 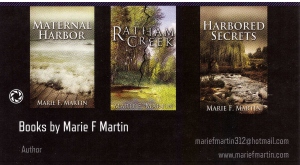 Betty Kuffel got sidetracked from completing a couple medical thrillers she is working on and published:

It’s a science-based update on all those things your mother never told you and you were afraid to ask. 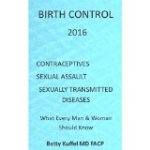 You can find it on her Amazon Page