I knew Mom kept letters she and Dad sent each other during WWII, but didn’t read them until a few years after her death. I think I wanted to prolong the anticipation, and felt a little uncomfortable looking at something so intimate and revealing about my parents. I knew theirs was a passionate marriage. How could something that started in a Montana town called Sunburst be otherwise?

Reading the letters, I came to understand just how difficult the long hardships and separations caused by WWII really were. Dad, a teacher, became a gunnery officer on a ship in the South Pacific. Mom stayed on the Big West Oilfield with her parents in their little house. My grandparents had one bedroom, while Mom and my two-year-old brother and eventually, I, shared the other.

The letters reveal little running jokes, stories about new and old friends, and earnest concerns of a young couple managing ration books and occasional train trips to be together on a shoestring budget. Their longing and loneliness come through. Here’s Dad:

I “writ” you one letter today. What am I doing writing again? Could it be love?

Mom wrote of how brokenhearted she felt after seeing him off at the Shelby Depot after his too-brief leave. She held up until, at the café, someone put the song “Together” on the jukebox.

They weathered the war and their years apart. All of it became part of our family lore. Their letters, though, were their story alone. Here’s a piece of Dad’s last letter before coming home:

“Well, Honey, we have written a lot of letters, haven’t we? Your letters helped out immeasurably. You have been grand throughout this whole business, Sweetheart, and I can hardly wait to get back with you, and I hope to God that we won’t have to be separated again.” 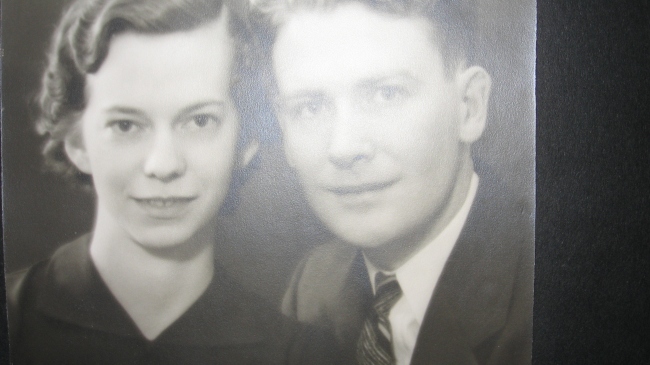