The Montana Maples are in full glory along my street in Kalispell. Three of my great-grandsons showed to clean my yard. What a fun beautiful time it was. After the leaves were all cleaned up I sent them home with a container of my beef barley soup and brownies filled with canned cherry pie filling and frosted with chocolate. Just a fun slice of Montana life.

I wouldn’t want to try this move.

I have been reading that one way to boost sales of a backlist book is to change the cover and work on a new blurb. Ratham Creek has been lagging in sales and new reviews so I am following the advice and we’ll see if the people in the know are right. Here is a peek at the new look with the help of Karri Klawiter, my cover designer and writer friends, Deb and Ann, who are always willing to edit and proof my many typos and awkward sentences. 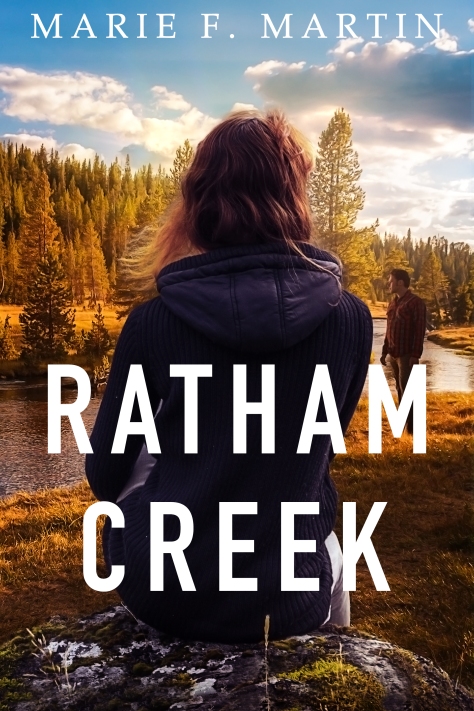 Arianne Hollis figures tossing a rose in her husband’s grave is the worst of all endings. Then reality sets in when she is forced to sell their home and used up her savings to clear his debts. To escape and come to terms with her future, she moves into an isolated cabin along Ratham Creek. In the quiet Montana setting and with a new job in the nearby small town, Arianne begins to recover. She meets Ross Ferrell, a handsome lonely member of the clannish mountain people. He slowly wins her love, but a deadly family feud erupts among rival groups living along the creek. Arianne can’t understand the violence that runs deep in Ross and his family. He cannot abandon them. Then Arianne becomes a target. Can she avoid the same vengeance that’s corrupting the clan? Can she save him and their relationship?

My younger sister, Doris, has dabbled with oil painting off and on for years, but never developed her craft until now. At age almost seventy she is going great guns with it. She has had a showing in Seattle and sold some of her work. It is so exciting. She is now planning to travel to Montana where we were raised and show paintings in July at Art in the Park in Kalispell. I no longer hear her complaining about age. The miracle of an active mind doing something that you love and get excited about  is what the age specialist tell us to do. She has found her passion. 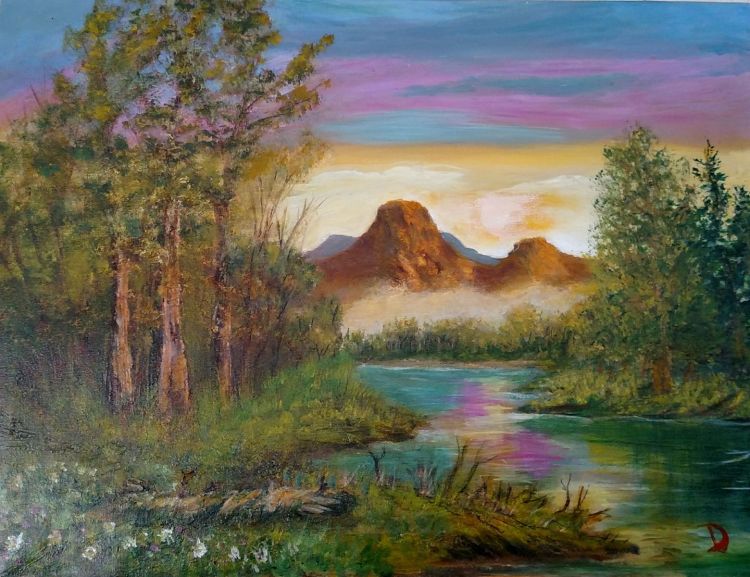 I was close to the same age when I published my first book. It has become a driving force in me and I have grown so much with new friendships and people willing to help me with my stories. It all has to do with us Connor girls facing older age and needing to kick start our creative talents.

My latest book will be published sometime this summer or early fall. The cover is already made. The blurb is a work in progress but here is what it says as of now: The red Corvette speeds into the night up a lonely stretch of curvy mountain road. Corinne Cooper figures they’re lost, but isn’t concerned about it. A few unexpected words with the man driving rekindles yearnings she thought were buried with her husband three years ago. Shocked by her thoughts, she is relieved to reach home safely. The next day, Corinne is still unable to set aside the desire to find a new love and seeks the help of her unpredictable sidekick. Edgy Brewster is delighted to assist in the search for a perfect companion, dragging her into questionable adventures. Troubles begin at a local honkytonk, multiply at a hilltop mega church, and reach critical mass at a secluded bingo parlor. Now a friend is dead, a nosey neighbor is found dead, and Corinne is the chief suspect in their murders. Every step she takes to prove her innocence digs her deeper, until. . . .

However my older sister, Norma, is now complaining that she hasn’t sold anything of a creative nature. She only spent her entire working career as a RN. Her talent or passion was used helping the sick and the aged, and besides I don’t feel sorry for a sister who looked like this. 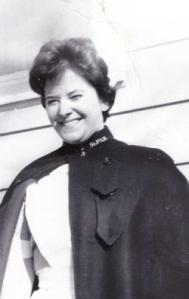 I am relaying our experiences as encouragement to everyone who thinks they’re too old to start a new adventure. Just do it.

I had a nice young woman approach me about guidelines for critique groups she is helping to organize for Authors of the Flathead. I told her I’d see what I could come up with. I wrote this list and then ran it by fellow critique partner and author. The following suggestions are what we like in our groups. Having another writers read your manuscripts is really the most basic way to learn. I have developed and honed what skills I have through two groups of very  dedicated writers. They  share in what success I have had.  This is one of my pages from “The Car Ride” after Ann worked on it. Good suggestions that I took to heart and my page is much better because of her. 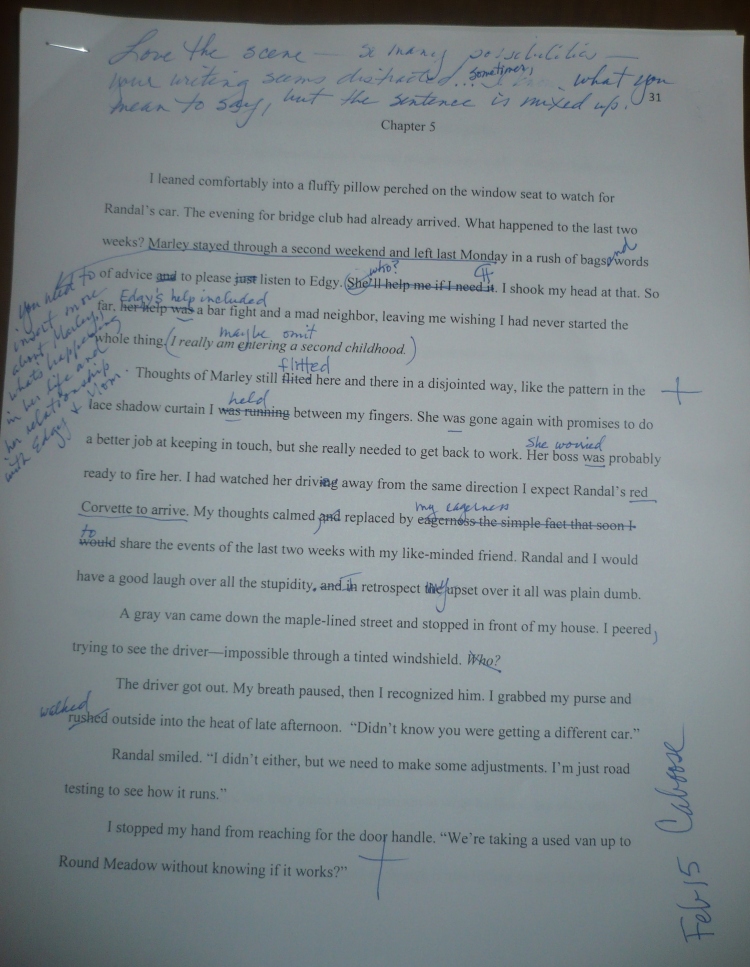 My page after a critique.

Last Monday, Ann blogged about the help she received from her critique group.  I thought I would do the same.  Just yesterday an email arrived from one of my critique partners who is traveling in Europe.  When I learned Brian was flying into Edinburgh Air Port, I asked him to take notes of the country side because I have the ladies in my upcoming novel, Harbor Hills Road, deplane at that airport.  Imagine my surprise and gratitude when I read the following note from Brian See.

It was a great sensation walking down the steps exiting the KLM flight from Amsterdam.   The Edinburgh air was musty and chilled with the moisture left after the morning fog had lifted.  My feet hit the tarmac at the bottom of the stairs and the race with other departed passengers was on.  Who would get to the customs gate first? I felt good about my prospects having been one of the first people off the plane.

“UK residents to the right, all others to the left,” the agent kept repeating with, “Have your entry form ready with passport,” interjected every third or fourth time.

He rips a three-by-four slip off a pad and hands me a skinny three-inch blue pen and points behind me to a small counter while continuing his rote cadence.  Shit.  I haul myself along with light luggage which no longer felt light or like luggage—more like an anchor now.   I realize my bladder is beginning to exert some pressure.  Just what I need, right?  I fill out the form and turn around to find myself at the end of a long line. So much for first through the gate.  It appears the UK residents get priority service.  Soon I’ll be doing the tight bladder shuffle.  On the other side of the passport agents, I see the familiar man and woman symbols we are universally accustomed to.

Finally, the UK natives are through and all agents are waving my line forward.  I hand the lady my slip, answer a few pointless questions, ask about currency exchange and head for the WC.  Now the only pressure is to get to the station and catch a train for Glasgow.  I’m getting quite weary having not slept yet.  I trade currency at the exchange and grab my luggage.  Out on the sidewalk there is a ticket booth for the busses.  I buy a ticket to the Edinburgh central station and hop on the waiting bus.  The streets are busy like any city.  For the most part, buildings are devoid of bright colors or large plate glass windows.  Stone and brick are the main themes.  There is a tower, very gothic, Medieval and tall. The stone is so dark it appears black and foreboding.  It could be right out of a Hollywood movie.  I wish I had time to go and see it up close.  The famous Edinburgh Castle is perched above the city not far from the train station.  It’s been forty-five years since I was last here.

The Scots are friendly, smile quite a bit and have a penchant for joking.  The invasion of people from other cultures is sharp in contrast.  They scowl and are curt in conversation almost angry.

I hop a train for Glasgow.

Most of Brian’s words will find their way into the scene I need.  Thank you, Critique Partner.