Writing can be a solitary life, so it is important for our craft and our sanity that we spend time with other writers. I’ve invited a long-time writer friend, Janet Fisher, to tell us about a trip she and three writer friends took recently when they attended the Women Writing the West conference in Oregon. I also sweet-talked her into showing us the cover of her newest book, The Shifting Winds, which is due out in April, 2016. 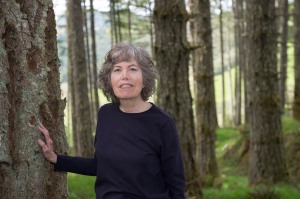 Three friends from my Eugene writing group trekked east with me the first weekend in October for some western flavor at a Women Writing the West conference at the Eagle Crest Resort near Redmond, Oregon.

The highlight for me was meeting my editor Erin Turner. She’s the Editorial Director of TwoDot Books, the Globe Pequot imprint for A Place of Her Own and for my next book, The Shifting Winds. It was great meeting Erin face to face and having a chance to sit down and talk with her about my upcoming book. She’s a wonderful editor. I feel like a very lucky writer.

The Shifting Winds, to be released April 2016 by Globe Pequot Press/TwoDot imprint.

The Shifting Winds, a historical novel this time, takes the reader to 1824 Oregon with plenty of real history wrapped around a fictional tale. Young Jennie Haviland never wanted to go to Oregon, but a British Hudson’s Bay Company clerk and an American mountain man vie for her as the two countries vie for this rich frontier land.

Something I kept hearing at this conference was how so many women felt they had found their tribe with Women Writing the West. I felt that too for my pioneer stories. It’s such a warm and supportive group.

A Place of Her Own, published by Globe Pequot Press/TwoDot imprint in 2014.

My friends and I from the west side rented a condo at the resort for the weekend, a lovely place nestled among the tall junipers, a bit apart from the conference center, so quiet only the delightful twitter of birds surrounded us. We each had a room of our own in the two-story building. We decided we could live there if we took a notion.

Writing conferences inevitably inspire me with all the workshops, networking, bookselling, and fun. My fellow travelers agreed wholeheartedly, all of us ready afterward to do great things with our next big writing projects.

Sounds like a fun time, Janet. We look forward to reading The Shifting Winds.

3 thoughts on “In the Company of Friends”