Today is Halloween, the evening vigil before All Hallows Day. The day set aside to honor Saints, known and unknown, who have gone before us. November 2nd is All Soul’s Day said to be the commemoration of all the faithful departed. These three days together are  known as Allhallowtide. As lovers of reading this week we’d think of authors we revere. Depending on our favorite genre: Shakespeare, Dickens, Mark Twain, Austen, Poe, the Bronte sisters, Agatha Christie, Jules Verne, Shelly and Byron, just to name a few.

But this month’s book club selection is Gutenberg’s Apprentice a novel by Alix Christie.

Yes, I remember learning about Gutenberg and his Bible back in some high school history class, but I didn’t understand the genius of the accomplishment or its implications.

By fifty-seven years of age, Johannes Gutenberg, a German merchant

turned black smith and gold smith, figured out how to forge combinations of metals that could be carved into letters.

Then he built a contraption that used those metal letters smeared with thick ink to print an entire page of words.

Until then scribes wrote by hand with quill whatever written word folks had.

Then with a grandiose or inspired idea he decided to print the entire Bible. It took three years (1452-1455) of intense, arduous work, but introduced the printing press to the world. The following year his partner/investor won a lawsuit which took Gutenberg’s workshop and printing press from him and left him bankrupt.

Gutenberg’s greatest accomplishment the beginning of equality in reading led to versions of smaller printers; typewriters like this Underwood of 1895.

Our universal keyboard of today was created in 1873 by Christopher L. Sholes, a Milwaukee newspaperman, poet, and part time inventor. He called it the QWERTY keyboard.

Guilty of taking my computer and keyboard for granted and complaining about slow internet connections, this Allhallowtide I will venerate Master Gutenberg for his vision and determination. Along with Peter Schoeffer, his apprentice, who went on to become a master printer and the first publisher. And I won’t forget all those imaginative, innovative folks who followed to bring the gift of mass-produced books to the world and me.

When Nate still had brown hair and wore glasses, and I had a 24 inch waist and the courage to go sleeveless.

I’m not a betting person and generally don’t like surprises. But I would bet that when major events in our lives occur, such as children graduating or getting married, the passing of dear friends or loved ones, retirement, or any significant milestone, we all tend to ask the same question. “Where the heck did all the years go?”

I’m asking that question this week because on Saturday, Nathan and I will celebrate our 33rd wedding anniversary. And frankly, I’m not ready for it. I don’t mean not ready in that, “Oh no, I haven’t bought him a gift yet,” kind of way. We stopped buying anniversary presents for each other twenty five years ago when he asked me what I wanted and I said a telescope. He bought me an electric blanket. First, I hate electric blankets. Secondly, we lived in South Texas at the time, on the mainland across from Galveston Island and ran our central air even on Christmas Day.

After explaining that while I loved looking at the stars, the fear of being electrocuted while I slept didn’t really appeal to me. So why the blanket? Turns out the box store he went to was out of telescopes, but they had a special on electric blankets. And, since it was the day of our anniversary and the store was closing, (he’s always been a last minute Christmas Eve shopper too) Nate decided I’d love the electric blanket because it was green and my favorite color is green.  Funny, but when I tell this story to women friends, they just sigh and shake their heads. But guys recognize the logic behind his decision immediately. You like green. The blanket is green. Thus, you’ll like the electric blanket. Did I mention I don’t like surprises? I also hate standing in the Return Line.

There’s been a few other misses too. Like when I said I’d like a CD for my birthday. On my birthday he handed me a lovely box. I opened it and found a CD alright, but not the kind of CD I wanted. Now, this time, the misunderstanding was my fault. CD to him meant compact disk. To my pragmatic self, CD stands for Certificate of Deposit. But it worked out okay as it was my favorite singer. So, no trip to the Return Line.

But some gifts have been both a surprise and a winner. Four years ago, he gave me a lite weight, rechargeable, battery operated screwdriver with a rotating head. Came with 16 different bits, and the great part was the bits are held in via a magnet. No chuck key to keep up with! I love it. It’s my favorite tool in my tool caddie. And over the years, I’ve stunned him with some great gifts. The photo above was from our first year anniversary. I surprised him with his first trip to Las Vegas. He still says it was his second best surprise ever.

Our kids, of course, were our best gifts to each other. I gave him a daughter. He gave me a son. That’s worked out rather well. Both finished college. Tara is married for ten years now and works in the orthopedic medical field. Garrett received his Masters in Social Work last June and works in the mental health field. Nathan and I are enjoying being empty nesters, especially since our chicks didn’t fly any farther from the nest than Livingston, Mt.

As I said, I’m not normally a betting person. But I’d wager $5.23 (my max bet) that this Saturday’s anniversary will play out like this. On Wednesday, I’ll say, “You want to go out to dinner for our anniversary?” Nathan will answer, “Sure.”  Come four o’clock Saturday afternoon, one of us will ask, “Do you still want to go out to dinner?” The other will answer, “I don’t know. Do you?” Then Nathan will say, “I could throw a couple of steaks on the grill, while you bake some potatoes.” And I’ll add, “I’ll fix a salad too.” Division of labor.

Later, I’ll find two cards on the kitchen table. One is a card from Nathan, something funny, like a picture of a wrinkled Shar Pei canine couple. The inside will say something like: Let’s grow old and wrinkled together.  But the real smile on my face will come from the little cartoon of the two of us that he’ll draw. For 33 years, Nathan has ALWAYS drawn me a cartoon whenever he sends any card. Then, he’ll write,” I love you,” and sign it Eppe, his nickname since he was a kid. The second card will be something sweet from our at home “kids.” There will be another Nathan cartoon, and this card will say, “We love you, too, Mom.” Then he’ll sign their names and draw their pictures: Jasmine and Maggie, our golden retrievers, and Shadow, the black cat with golden eyes. Sometimes he adds the deer, wild turkeys, bear, skunks, and the rest of the menagerie of critters that wonder through from time to time. I will save these cards with all the others from years past. I will give him a new bottle of Tums and his anniversary card from me and our critter young’uns later, just as soon as I remember where I hid it so I wouldn’t forget it.

LESLIE BUDEWITZ: Oh, October! Thrilled to announce the release, on October 4, of KILLING THYME, my third Spice Shop Mystery, set in Seattle’s Pike Place Market.  When Pepper investigates the murder of a market artist, she roots out long-buried secrets with unexpected ties to her family, will she be digging her own grave? Read an excerpt and find the buy links on my website.  Join me for a Mystery Teac at the Bigfork Library on Tues, Oct 4, from 3-5 pm. We’ll talk mysteries, sip tea and eat cookies (recipes in the

book!), and play mystery trivia! If you’re in Missoula, please join me for a book talk at Fact & Fiction on Thurs, Oct 6, at 7 pm. And swing by the Bigfork Art & Cultural Center for my launch party and signing on Friday, Oct 7, 5-7 p.m., and visit the annual Watermedia exhibit sponsored by the Montana Watercolor Society at the same time! (I peeked — it’s fabulous!)

I’ll be in Seattle on October 13 — signing at Seattle Mystery Bookshop at noon, and reading/talking/signing a 7 p.m. at Third Place Books in Lake City.

Wherever you are, take thyme for a good mystery! 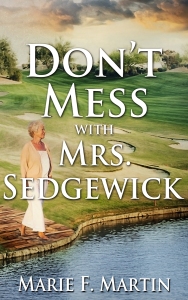 Roberta Sedgewick is stuck in a house that is too empty without her beloved Burton—the rat died and left her with his dog and rooms that rattle. She convinces her three golfing buddies, all in their seventies, to sell their homes and buy adjoining condos. The widows intend to spend the rest of their days golfing, gambling at the casino, and having fun. Oh, the heaven of it. But then they all hire the same maid who uncovers long-hidden criminal secrets kept by each woman. Oh, the horror of it. The reputations of their deceased husbands, a banker, a minister, and a respected farmer, will be tarnished forever. Three of the widows could face jail time, and the fourth fears for her life. Whatever will they do with the conniving, blackmailing maid?

If you grew to love the characters in Marie F. Martin’s previous novels Maternal Harbor, Harbored Secrets, and Ratham Creek, you will treasure Roberta and her friends in the mystery Don’t Mess With Mrs. Sedgewick.