Blame the Car Ride will be released in the first part of January. Exact date will be announced soon on my website.

A simple game of chance results in Corinne Cooper’s best friend’s death and set her on a collision course with a detective still nursing hate from the past.

Three years of lonesome widowhood leads Corinne Cooper to a simple need. She wants a man. She cons her friend Edgy Brewster into helping her find just the right guy. They visit a honkytonk, the biggest church in town, and a bingo parlor looking for an eligible bachelor. Nothing goes as planned. Now Corinne is the prime suspect in a murder and must prove her innocence. Any of the four men she has met could have committed the heinous act. But which one?

Snow…I’ve lived in places that get a lot of it.  Like Ashton, Idaho–where about four feet on the level was an average winter.  Michigan, where lake effect could dump a couple of feet in a couple of hours.  And I will admit I never liked driving in it, especially after I slid off Montana Highway 37 one day between Rexford and Eureka.

But now, I find myself wishing for it. No, I’m not a skier, though there has been some cross-country skiing in the past.  Maybe it’s because I’m retired…

I have two theories on this.  My current one is I’m reverting to my childhood.  I grew up in southern Arkansas (until I turned 11).  I never saw snow until I was past five years old.  It was amazing!  I remember running out to touch and being surprised that it was cold.  Maybe I was expecting that cottony stuff they put in the store windows to look like snow.

It never snowed at Christmas in Arkansas, but my two younger brothers and I always secretly wished for it.  Dad helped this along by playing his old 78-rpm Bing Crosby record every Christmas Eve.  It was “White Christmas” of course.

When we moved to northern Illinois in 1963, I had my first actual white Christmas, and the house we were renting even had some old sleds in the garage.  What fun we had!  I guess this is my current state of mind–looking for ways to find joy in life, as the years fly past me.  Being back in Montana and seeing the snow-covered mountains is wonderful.  And I am thankful for the old memories, too.

By Anne B. Howard

Each holiday season as Keith and I trim a fresh tree, I always think back to my childhood and the shiny aluminum tree my parents displayed proudly, year after year. Dad mounted a rotating pink, blue and gold spotlight on the ceiling, creating a kaleidoscope-of-color effect, and he and my mother thought it was the most beautiful tree in town. I was not convinced. I yearned for a “real Christmas tree.” A freshly cut tree that smelled of the forest. A tree I could decorate with beautiful ornaments, sparkling garland, colored lights and silvery tinsel draped over its branches. I felt afraid of that aluminum tree my parents coveted, afraid and resentful, because I couldn’t go near it. “Stay away from that tree,” my mother scolded. “If you knock it over, it could cut you to pieces.” After thrilling my folks for ten years, silver was eventually replaced with “artificial green,” but I was so disappointed I cried.

That first Christmas that Keith and I spent in Montana, in 1993, after our move from Kansas to “real-Christmas-tree heaven,” I was delighted by my selection of freshly cut trees. Several years passed, however, before I realized the true extent of my options. One evening, over a bottle of wine with friends, I confessed to my obsession with real Christmas trees.

“We’re in,” my friend said. “Tomorrow we get a permit and head up Crane Mountain, on Forest Service land, to find you the freshest, most beautiful tree you’ve ever seen. Cut any one you like for five bucks.”

Excited by the prospect of selecting a fresh tree from the forest, Keith and I, and our two friends, drove quite a long way up the Crane Mountain Road before pulling the car over and trudging through eight inches of fresh snow to a broad meadow, sprinkled with trees of every variety. Immediately, I saw the tree I wanted, but before Keith could get his saw in motion, I changed my mind. For well over an hour I ran from one tree to the next, vowing that each would be “my final choice,” only to find a bare spot or a crooked trunk, which every Christmas tree critic knows is a deal-breaker. Typically a very patient man, I had pushed him to his breaking point. “I mean it, Becky. Make a decision. This is it. I’m going home.”

Meanwhile, our friends stood patiently next to their selection—a measly little thing, by my standards. I mean, they were paying the same five dollars as me for a nice big tree, so why, I wondered, hadn’t they chosen the tallest tree they could get on their car?

Growing more annoyed by the minute, Keith jumped on my latest “final choice” with clenched teeth, and began working his saw. It took the four of us, panting and groaning, to drag that snow-laden tree over the stumps and downfall, and out of that meadow, where, after another hour spent cursing and scratching the car finish and losing the tree off the opposite side, we secured her to the roof. “I’ll never get this so-and-so through the front door,” Keith declared, furious. I kept my mouth shut—it was safer that way. Unfortunately, however, he was right. The tree wouldn’t go through the front door. Or the back door. Not even with four adults pushing and pulling with all of our might, determined to force it through. “Not going. No way,” he declared, angrily.

“What about the French doors off the deck?” I suggested, timidly.

Next, they dragged the enormous Frazier Fur up the back steps and onto the deck as I raced through the house and threw open the doors. Just as I suspected, the tree slipped easily through, but was a good four feet too tall for my ceiling. By this point, I was in big trouble and I knew it. “I’ll throw the damn thing off the deck,” Keith threatened.

Then, it began to snow. Big flakes, the size of quarters, began to stick to the cold needles creating a lovely lace flocking. “Set it up on the deck,” I said, “outside the French doors. I’ll load it with colored lights and the spotlight will illuminate the falling snow. It will be beautiful.” He shook his head and rolled his eyes, but with the help of our friends, we muscled the big tree into a make-shift stand and secured it to the railing, so it couldn’t fall over.

Once the tree was lit and flocked with snow, Keith came around. In fact, I may have heard him bragging a little to our neighbors, when he thought I was out of earshot. He said it was the perfect place for such a great Christmas tree. And, yes, it was a unique holiday experience that year, having the tree on the deck, its branches ablaze with colored lights and heavily flocked with snow. Different, but incredibly beautiful—a memory I’ll always hold close to my heart as the best Christmas tree ever.

While pondering the upcoming holidays my stream of consciousness meandered over past memories and future dreams. A few quiet moments of reflection led of course to Dickens’ ghosts.  My favorite version is The Muppet Christmas Carol with Michael Caine.

I love the little mice bookkeepers working dutifully and diligently in the cold office under the supervision of the kind-hearted Bob Cratchit performed by Kermit. Best of all though is the interplay between Rizzo the Rat acting as sidekick to Gonzo while he narrates the story as Charles Dickens himself.

My thoughts bumped over the moral of the story and what it means in today’s world. I got stuck on ‘don’t be stingy’ but wanted more. So what else is Dickens telling us?

On enotes.com’s website where they proclaim “We’re the Literature Experts” I found an article by Christian Themes (literary essentials: Christian fiction and nonfiction) titled     A Christmas Carol Themes. Let me paraphrase:

Scrooge’s initial penny-pinching reflects the values taking hold during the Industrial Revolution. Dickens illustrates what happens when individuals view relationships and other people through their financial worth. The author exposes the tremendous gap between the rich and the poor.

Then he illustrates a solution, individual redemption. The world becomes a better place almost immediately after Scrooge changes his outlook. The story implies that a renewed connection to humanity is, in fact, the very essence of redemption. His change is not introspective and personal; it is outward-looking and social.

While the results of Scrooge’s change didn’t alter the social structure itself, the compassion he showed to individual people did change the social relationships they shared. Despair turned to hope. isolation to belonging, and unhappiness to joy.

Wow! And I thought it was just fun to watch.

Yes, it’s a Christian based tale, but certainly can be applied to all of us no matter our beliefs. Let’s follow Scrooge’s example, enhance our relationships, and join Tiny Tim in his prayer.

In case you want to catch a lecture from Susan or attend a book signing, here is her December schedule: 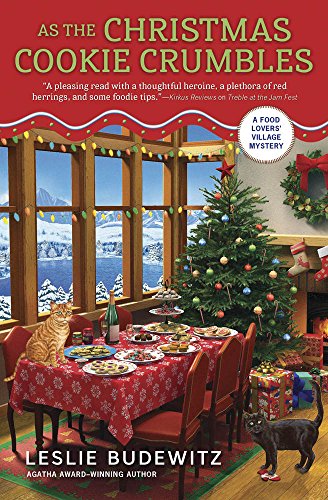 LESLIE BUDEWITZ:  ‘Tis the season for a good book! Join me during the Kalispell Holiday Art Stroll on Friday, December 7, from 5-8 pm. I’ll be signing books at Montana Marie on Main Street, formerly Think Local, a terrific emporium of Montana-made art, cards, candles, lotions, books and much more. Shops and galleries throughout downtown Kalispell will be open late with food, drink, music, and more.

And if you can’t make it that evening, you can find signed copies of my books on the shelves of these Flathead Valley shops: in Whitefish, BookWorks. In Kalispell, Montana Marie and the BookShelf on Main Street, and Montana Art & Gift in the airport. And in Bigfork, Roma’s Kitchen Shop, Nancy O’s Interiors, and the Bigfork Art and Cultural Center. (E-books and audio books available in the usual online sources.)

Wishing you and yours a joy-filled season of love and friendship, regardless of what and how you celebrate.