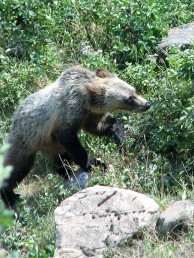 I don’t like snakes. Spiders get squashed if they dare come around me, but bears?  Bears scare the heck out of me.

When I lived alone in a wilderness cabin, hiking was a daily pleasure.  One day, I tried a different path, going off up a mountain side and angling back into a gorgeous meadow filled with wildflowers.

And there was a scary rumbling, a warning of danger, go no further, there may be monsters.  I tried several times to wade through the head-high grass to see what was on the other side. Each time the noise filled my head, and I turned back.  I could feel something watching me, making shivers race up my spine.  Finally, I gave up and made my way home.

I think a mother bear was probably telling me to go away or she’d get me.  Never did see that bear, but I saw lots of tracks on those hikes, bear poop, too.

On one of those hot summer days, I also saw a herd of caribou.  I’m not kidding, they were truly caribou, about fifteen of them, trotting down the Montana wilderness road at a stately pace.  I think they had come from Canada, checking out their southern neighbor to see if they’d like living here.  They must have decided it wasn’t to their liking. I never saw them again.

I have two Twitter accounts—one for the exchange of writing-related information
(@ann_minnett) and a new account I use to vent about politics and controversial topics with like-minded tweeters. I won’t share the name of the second for obvious reasons, but I swear I’m not too mean and rarely malign a part of someone’s anatomy, for example, or post mocking photos. Just saying.

A woman I admire and follow on the political account BLOCKED me over the weekend, and I can’t for the life of me figure out why. The woman has thousands of followers while my political followers number in the double digits. She and I share beliefs, vocabularies, and passions, so why did she block me? Was it something I tweeted? I created the political account precisely not to annoy others but simply to express myself. I went back through my recent tweets to determine what I said to offend her. I found nothing. Next, I schemed ways to ask her why. I felt jilted.

Bottom line, she hurt my feelings.

It occurs to me (and you’re likely way ahead of me) that my thin-skinned sensitivities aren’t meant to be shared on social media. There’s a saying among my friends: Your opinion of me is none of my business, but my opinion of you could kill me.

Fine. To the woman who blocked me: I forgive your lapse in judgment about me, and I’m letting go of you and political Twitter to save my sanity. The fiery love affair between politics and social media is not for me.

As women writers, we work in solitude. Yet, few of us produce a completed, polished novel alone. We depend on our fellow writers for critiques, encouragement, holding our feet to the writing fire,  and for the exchange of information on everything from marketing to the newest industry trends. We join groups like Montana Women Writers to learn, to share our knowledge, successes, and to have someone to commiserate with when the inevitable rejection letters come. We are a neighborhood of strong women writers. But we are helped in our writing journey by many non-writers like family, friends, and even neighbors next door. I was reflecting on this last month on the one-year anniversary of the death of my  neighbor, Ida Mae Vonderheide.

In the thirty years I was blessed to have Ida as my friend and neighbor, I never found anything  she couldn’t do. Plumbing, electrical, even roofing. I trailed after her in awe as she put in phone lines, fixed leaky pipes, and diagnosed correctly why my car refused to start. But she didn’t stop there. She’d phone one of her sons and tell them, “Bring Debbie a new battery, (or whatever was needed) and put it on for her.” And they would.

My husband worked out of state for years and the kids married, moved away or left for college. But even though I lived alone much of the time, I never worried because Ida was just a phone call and a couple of acres away. When I was in a wheelchair due to a car accident, Ida  took me to  the doctor. Once, I was caring for my dad who had dementia and his bathroom sink started leaking. When Ida heard about it, she and her sister, Martha, came over and worked until midnight to fix it! Need help finding the best water witch or tax preparer? Call Ida. Around our house, Ida’s words were gospel.

Although Ida left us too soon, I think of her every day. Every time I pick up the phone, I remember Ida put those phone lines in. The lights in the barn: Ida wired those, too. Even when I turn onto the dirt road we live on and see the county road sign, I am reminded of my cherished friend and neighbor. The name of our road—Vonderheide Lane.

There is a Chinese Proverb: A good neighbor is a priceless treasure. The author of that proverb must have had the good fortune to have a neighbor like Ida Mae Vonderheide.

Thanks for stopping by ~~ Deborah

My new novel, SHADOWS of HOME, a southern romantic suspense will be out later this month on Amazon.

LESLIE BUDEWITZ: Oh, how true those pictures are! With spring, I’ve made an effort to clean my office, but you know how that goes—every file and pile is a day’s worth of projects, a 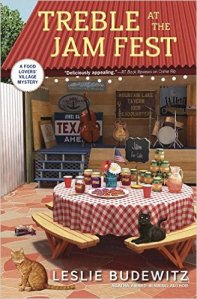 nd while I’m busy with those, more pile up. Writing and revising, and talking about books, are much more fun than cleaning! I’m getting ready for the launch of TREBLE AT THE JAM FEST, the fourth Food Lovers’ Village Mystery, coming June 8 from Midnight Ink—you can pre-order it now. And I’m finishing up the fifth installment, set at the magical time of Christmas in the lakeside resort community of Jewel Bay, Montana. Meanwhile, there’s a terrific ebook sale, for Kindle, Nook, Kobo, and other formats! Death al Dente, first in the Food Lovers’ Village series, is 2.99, and Crime Rib, the second is 5.99. My first two Spice Shop Mysteries are also on sale, Assault & Pepper for 2.99 and Guilty as Cinnamon for 5.99. And the audio book of Death al Dente will be out April 30!

Later in April, I’ll be at Malice Domestic, the annual fan convention celebrating the traditional mystery, in Washington, D.C. It’s great fun—five hundred readers and writers, including book bloggers, booksellers, and librarians, plus some agents and editors, attending panel discussions and interviews, teas and charity auctions, and constantly chatting about reading and writing.

I hope spring is blooming with books for you!

It’s true what they say. There really is a light at the end of the tunnel.  For me, that light is FINALLY finishing up a novel I started over a decade ago. SHADOWS OF HOME will be available on Amazon later this month. It is a southern romantic-suspense set in the bayous around Caddo Lake in NW Louisiana in 1970.

After five years of city life, Elita Pearl Dupree is going home to the mystical land of her birth, the mysterious waters of Indian lore called Caddo Lake.

She’s determined to find out the truth about her father’s mysterious death, and while she’s at it, hopes to rekindle her relationship with her first love, Royce Sutton. Elita soon discovers that things and people can change a lot in five years, and not necessarily for the better.

A woman with questions. A man with secrets. A bayou without mercy.