repeating my words, mocking me, taunting me,
daring me to deny her presence once again.

The first time I saw her, I turned away.
“She’s not real,” I told myself.
Just the imagination of a middle-aged wife and mother.
But then I saw her again in the dress shop,
checking prices first, sizes second.

“Go away,” I ordered. “You’re not welcomed here.”
After all, I know who I am, what I like,
and how best to get through the day.
She laughed and said, “Get used to it, honey.
I’m here to stay.”

With each passing year her intrusions continued,
less subtle, more frequent,
until at last, I grew weary
of fighting her inevitable presence.
Her influence, I could no longer deny.

More and more her mannerisms seep inside of me.
Qualities I once ridiculed now demand my belated respect.
So in graceful defeat, I wrap myself in her cloak,
letting her wisdom and memories merge with my own
until they are one.

The photo above is of my parents, Betty and Charlie, in 1947. She passed away in 2002, but the older I get, the more I see her in my mannerisms and now, in my daughter’s.

Hope you had a wonderful Mother’s Day and thanks for stopping by.

P.S. My new romantic-suspense novel, Shadows of Home, is available on Amazon.com

Sex scenes. When, why, and where do they belong in novels? Sex is as important in fiction as in real life. And fiction incorporates particular reasons involving plot and structure for characters to engage in passion. The engaging, its reason for being, its character revelations, and its aftermath, even those details shown and not shown, should enhance the story

I’ve written scenes of passion into River with no Bridge (out June 21). As my protagonist, Irish-Catholic Nora, moves through life, she experiences love, or in one case lust, with three men. I hope readers will sense that the totality of these relationships, and her very different partners, move her from virginity to becoming a sensual lover. Sexual attitudes reveal so much about our characters and their changes.

Sex scenes can also be ugly precursors to damaging consequences for characters victimized by coercion. I’ve just read City of Light, a historical novel set in Buffalo, New York, at the time of the Pan American Expo. Author Lauren Belfer incorporates in one episode a depiction of women’s lack of empowerment at the turn of the century. The protagonist is coerced into having sex with Grover Cleveland. She uses details (“Your stomach like a rubbery cushion”) to show how frightening and disorienting forced sex is and how it determines so much of the story that follows.

After City of Light, I turned to Montana Women Writers own Deborah Epperson’s latest novel, Shadows of Home. Two former teenage lovers reclaim that status in several detailed scenes of passion renewed. Lovemaking is shown as their key to rediscovery and joyful reunion. It’s also a means of healing rifts, stress, and misunderstanding.

A sex scene should only be used as needed to move the story forward. The introduction of lovemaking changes characters’ relationships. A sex scene just to have a sex scene will never work. Authors often struggle with the verbal details of the sex scene. The words used can vary depending on the characters. Crude characters tend to use crude words. More refined lovers, and seducers, use a refined vocabulary. Writers also vary in our own ideas of propriety. Modern readers are quite sophisticated and unlikely to be as easily offended as their historical counterparts.

Remember the language of a sex scene belongs to the character, not the author. If the story needs the scene then use it. There are many ways to write sex scenes. Every sentence should move the story forward and show us what our characters desire or fear.

Last year during a tour of France my daughter, Bonnie, and I made a quick stop in Marseille; a jumping-off point to Monaco. Our focus was on Princess Grace Kelly; the palace and a drive up the famous, winding, cliff-hugging road.

Our train from Paris arrived in Marseille late afternoon. We picked up a rental car and headed to our Airbnb lodging in the old part of the city. In a blink of an eye we found ourselves on narrow streets filled with cars racing around curves, merging into already clogged streets, with drivers who had seemingly no regard for others.  Very loud motor cycles whipped in and out around moving vehicles, driving not in the lanes, but on the lines that divide them. And Bonnie kept up the pace.

Yikes!! I held on tight!

Flying past ancient-looking pastel stone buildings, I caught a glimpse of a Moroccan man standing in front of a shop laughing with a couple of other men.

The GPS system directed us to public parking close to the apartment and we walked from there. After climbing 107 steps of a circular staircase with broken tiles under foot, yes, with our luggage, we settled into the apartment which was definitely worth the climb. Then we walked down the steps (much easier than climbing up) to the old port soaking up the area’s history and atmosphere.

We were greeted by bright sunshine, clear blue skies with a warm breeze off the sparkling Mediterranean Sea’s varied hues of blues and greens. My kind of perfect day.

Back home committing my imagination to paper I needed the name of the Moroccan man’s attire. Yea for Google!! After finding info and photos of the jabador more Googling got me a suitable name for him, place of birth, and back story.

I have to admit that I can get lost in the research. I have spent hours on internet searches and studying the results. And Google maps is indispensable for settings and determining distances. Their street views are wonderful and were invaluable as I orchestrated a chase scene around Marseille.

Besides giving me many enjoyable hours investigating and learning, one thing always leads to another. The history of Morocco pointed the way to the Phoenician peoples where their history gave me the item of antiquity the story would center around.

An article entitled Research for Fiction Writing in Cornell Research by Alexander Chang explains how J. Robert Lennon, author of See You in Paradise (Greywolf, 2014) and teacher of English at Cornell University uses the internet searches to find details for his stories. Here’s a quote:

In doing research as a fiction writer, Lennon embraces a term his wife once called [him and his friends] them: professional dilettantes. “I like that as a description for writers,” he says. “I love going to parties with writers—they always have super shallow knowledge of a zillion different things.”

I had to Google the definition, but it made me laugh out loud!

diləˈtänt,diləˈtäntē/ noun 1. a person who cultivates

an area of interest without real commitment or knowledge.

That’s me! Due to my love of research I know a multitude of unrelated facts. Like:

Did you know the Phoenicians were the first known people to establish an alphabet? They were industrious and successful merchants who needed a method of keeping their accounts. This was back between 1500 and 1050 B.C. They devised 22 letters, only consonants, to represent the sound of their language. Over time the Greeks and Romans adjusted the original symbols which eventually gave us our 26 letters that represent the sound of our language. This chart shows the changes. 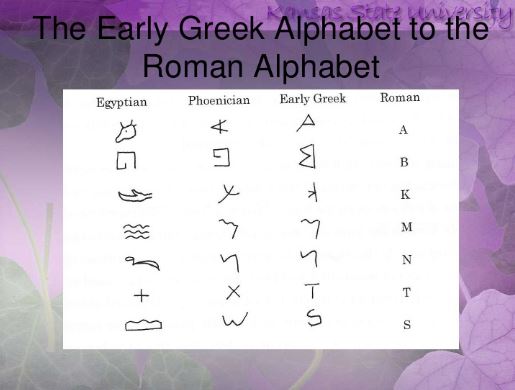 These people also invented ink and paper. And when they bound pages together for the first time in the city of Bylos its name led to two of our modern-day words—book and bible.

I can tell you the history of sweet potatoes. Indigenous of South America Columbus took them back to Spain and Portugal. From there Portuguese sailors introduced them to Nigeria where their main crop was another tuber they called yams (not to be confused with our yams, theirs is white and round and belongs to a different plant family). Eventually the slave trade ships brought seedlings to North Carolina which is now our main growing area for the delicious tuber.

Oh, yes. And then there’s Queen Anne’s nephew Edward Hyde Lord Cornbury who held the office of Governor in both New York and New Jersey from 1701-1708. To open the New Jersey General Assembly he dressed as a woman of fashion. His rational was that since he represented a woman, Queen Anne, he should look like one.

And if you ever want to know the particulars of the early Pennsylvania-German’s Groundhog traditions, just ask.

For some writers research may be a drudgery to avoid at all costs, but for me it opens the world of ideas, events, characters, and settings.

I love getting lost in the research! 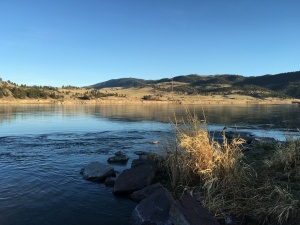 By ANNE B. HOWARD- After a brutal and depleting Montana winter, our first river sojourn will be good medicine.  Unplugged, untangled and unconcerned, we’ll drift silently down an emerald current, casting into wise ancient waters, convinced that catching fish is not the point.

In spring of 2016, Keith and I anchored for lunch along the secluded bank of a small island on the Missouri River. Startled, a large flock of Canadian Geese took to the sky, protesting loudly, as awe-struck, we stumbled upon enormous down-lined nests filled with glistening eggs the size of tennis-balls, warming in the midday sun.

Eagles soared above our heads, following the 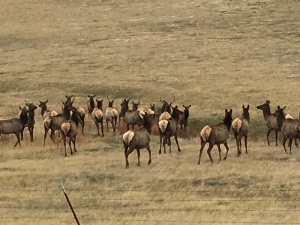 boat as we cast our flies, and swooped to the surface to pick off fingerlings rising from the depths for a closer look. Deer and butterfly frolicked in the sweet tall grasses along the bank, oblivious to our silent craft, while squawking pelicans lined the shore of a tiny island downstream. Rounding the bend, we surprised a grazing herd of elk, and marveled at their startled yet curious effort to make sense of our form. Sniffing and snorting, the big buck turned. Alarmed, the others followed, heading for the cover of trees.

At the end of the day, our nets came up empty, but our hearts are still filled with the memory of a magnificent day on the Mighty Mo, together. With each passing year, and each new birthday, I feel a deepened urgency to visit the river often, while we still can. We are never more alive than when we live in the moment on rivers, Keith and I. The joy has always been in the journey. Our destination will arrive soon enough.

LESLIE BUDEWITZ: I’m on the road today — or in the air, heading home from the annual Malice Domestic Mystery Convention held in Bethesda, MD, a fan convention celebrating the traditional mystery, and home of the Agatha Awards. It’s a fun time, attending panel discussions and interviews, participating in the panel on food in mystery, and visiting with readers and authors from across the continent. Of course, afterwards, my “To Be Read” pile will reach mountainous proportions!

On May 12, I’ll be participating in the Whitefish Library Association’s annual Dorothy M. Johnson Book Festival, honoring the enduring legacy of one of Montana’s best-known and best-loved authors. Join the fun Sat May 12, 6-9 pm, at the O’Shaughnessy Center in Whitefish. Authors from around the Flathead will be signing books and visiting with readers. I’d love to see you there.

Marie Martin: I am also attending the Dorthy M Johnson Book Festival.  I will present a work shop titled marrying Characters and Settings at the Whitefish Library from 1-3 in the afternoon. In the evening, I’ll be at the O’Shaughnessy Center with my books. It will be a nice time to visit with readers and friends. Hope to see you there.